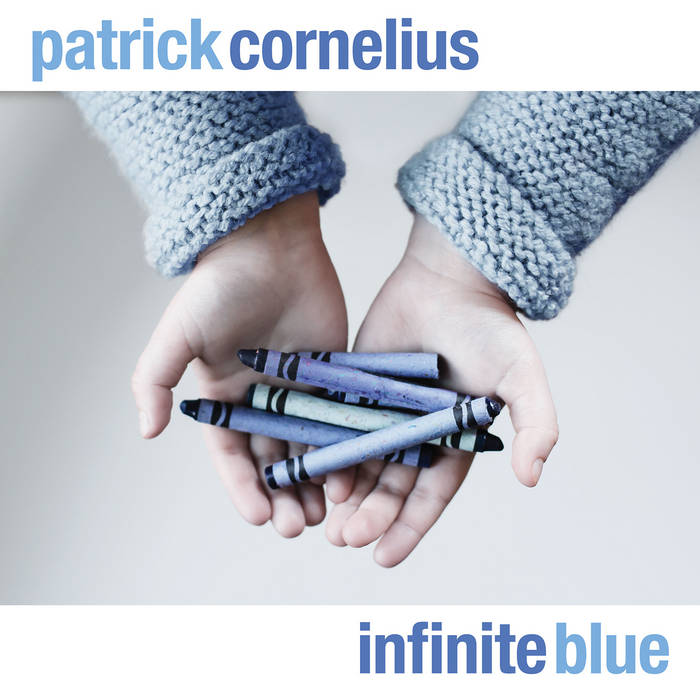 Infinite Blue is the second album for Whirlwind by New York-based saxophonist and composer Patrick Cornelius, and represents the refinement of melodic concepts that he has been exploring for years (and over the course of three previous solo albums). The idea of telling a story through the contour of melody and the color of orchestration continues to fascinate the young bandleader. Every song written for this new release tells a discrete story, either from the composer’s personal experience or some corner of his imagination. To bring such specifically programmatic music to life, he enlisted an A-List of musicians with a keen ability to accompany and improvise with an ear towards musical narrative.

Pianist Frank Kimbrough is best known for the bespoke beauty that he creates within every single one of Maria Schneider’s gorgeous masterpieces for large ensemble. He brings an unparalleled finesse and the classiest brand of swing to the proceedings. Percussion master Jeff Ballard’s resume speaks for itself, but most specifically his work with Brad Mehldau and with his own band Fairgrounds affirm his mastery of storytelling with rhythm. One of Patrick’s goals for Infinite Blue was to bring together established, seasoned professionals like Kimbrough and Ballard together with musicians of his own generation. There is no other musician with whom Cornelius has toured more than London-based bassist Michael Janisch, whose unrelenting groove and musical palette provide the sonic foundation for the entire album. Trombonist Nick Vayenas and has been a stalwart collaborator of Patrick’s since their days at Berklee College of Music together in the 90s, and Miami native Mike Rodriguez (who earned his stripes playing with artists from Eric Reed to Charlie Hayden to Gonzalo Rubalcaba) is one of the leading trumpet virtuosos in New York right now.

The idea for Infinite Blue struck during an airplane flight from New York to Texas on a family trip. Seated next to a window, Patrick gazed out into the clear blue expanse, toyed with a melodic fragment in his head, and was able to jot it down into composition notebook during the flight. Upon returning home, the saxophonist got to work fleshing out the composition. When his three year old daughter handed him her coloring book and a handful of crayons to play with, one of the crayons caught his eye. It was labeled 'Cielo Infinito'.

"There's a certain jolt of energy in the music of alto saxophonist Patrick Cornelius."
The Village Voice

"An album that has all the elements of great music: elegant compositions, world-class players and a gifted point man leading the way."
All About Jazz

"It’s Cornelius who leads from the front and on this his fourth album as a leader he is clearly getting results."
Marlbank

"Infinite Blue is another touchstone in his career... stunning for its melodic and emotional content."
Step Tempest

"An alto saxophonist with a coolly rounded sound and fleetfooted delivery... elegantly polyphonic themes..."
The Guardian

"Infinite Blue is an inspired and reverent tip of the cap to the innovators and stalwarts who moved jazz forward. Cornelius and his bandmates not only support and extend this tradition, they’re now a viable part of it. This album ensures that they can stand tall and proud beside all of the great bands they salute."
NYC Jazz Record

"A saxophonist specializing in a nimble species of postbop."
The New York Times

"Check it out."
Midwest Record

"It’s a classy and sophisticated affair with some excellent playing from a top notch core quartet.
The Jazz Mann

"Although Cornelius is the prime mover, apart from the compositions, his alto playing - cool and Pepperish - is a treat, there are other delights. Rodriguez, described as one of New York's leading trumpet virtuosos has Charlie Haden and Eric Reed on his resume and has a purity of sound that is rare today. Nick Vayenas, trombonist and fine vocalist in his own right leaves the vox humana behind to blow some beautiful bone on four of the tracks. Kimbrough, a long established member of Maria Schneider's various groups and a faculty member at Julliard, impresses on keys while Janisch, who gives a new meaning to the word ubiquitous, is, as he always is, the perfect anchor man and Ballard, taking time out from Brad Mehldau. provides the drive when drive is needed and the TLC when it isn't."
Bebop Spoken Here

"Ballard is a pleasure to listen to as always, it’s easy to hear why so many younger musicians listen to his work with Brad Mehldau for inspiration."
Marlbank

"It’s the beautiful, patient ballads on Infinite Blue that really lift the disc to another level. Waiting, prefaced by a strong, lovely bass statement by Janisch, features some lovely writing for three horns, and a especially potent solos by Cornelius, who’s really singing through his horn, and Kimbrough, as colorful and poised as can be. Even better is the quartet piece In The Quiet Moments, a marvelously slow and poignant waltzing. The composition itself cries out for lyrics, and the focus of the performance never wavers.
The Ottawa Citizen

"A neatly constructed programme with a lot to recommend it. Nice recording, too."
The Jazz Breakfast